skip to main | skip to sidebar

On 31 March Sylvia and I were up early for a long drive to Mangonui in the far north. We used to live in the area so could get in a visit or two around the compass swings. First up was the Taitimu which is owned by Chris Low of Picses Charters. I had the pleasure of successfully going out fishing with him just before Christmas while camping next door to where we used to live. Tucker included fish and chips from the well known fish shop on the harbour in Mangonui. 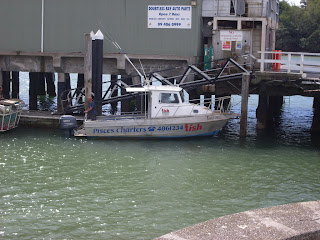 Later in the morning it was time to swing the compass on a Coast  Guard vessel for the local Coast Guard branch. Good As Gold was launched and we did the adjustment with one of two outboards awaiting maintenance.
Posted by Compass Adjuster NZ at 2:32 AM